I guess life leads you to a point where you become inspired by certain things or people. I wanted to show a few of my inspirations, a bit of travel (which is always an inspiration) and include a bit of fun along the way.

I’ve always travelled ever since my dad dragged his family around East Africa on safari most weekends, starting from when I was a baby. He put my first snake in my hands at the age of about 18 months and so I’ve never had a fear of them, or spiders and other traditional scaries. Well, not a big fan of mosquitos but since they are great pollinators, we’ll have to put up with them. 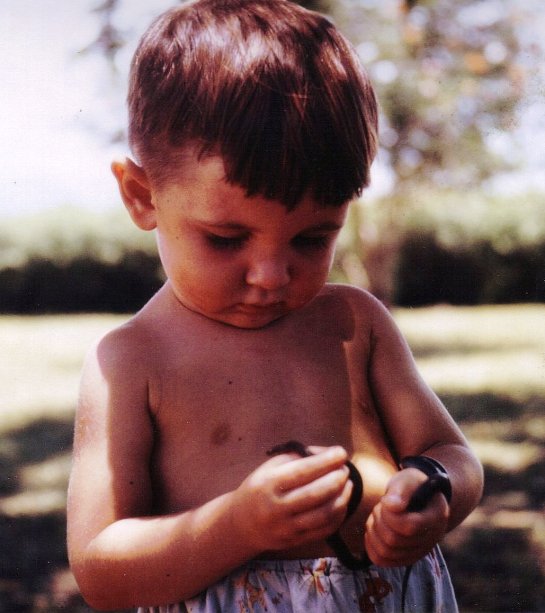 As I grew older, the snakes grew longer 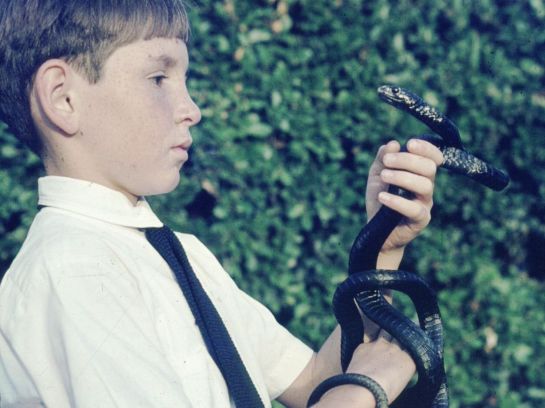 and the animals grew weirder 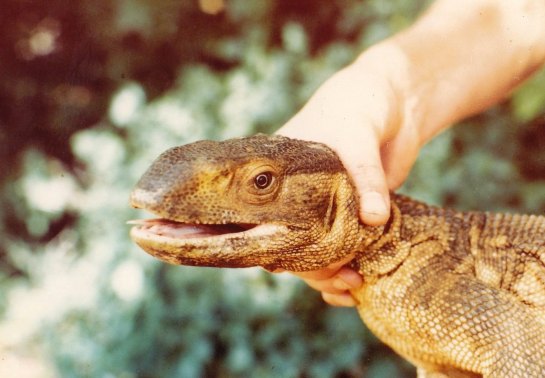 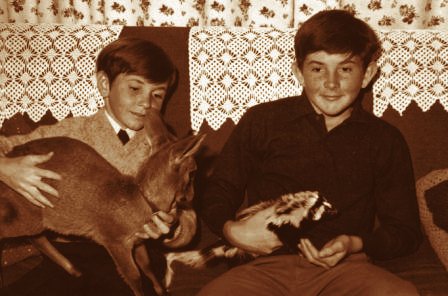 I’m with the duiker, my brother is with the zorilla

And then older still I started to travel on my own with a definite focus on the style of travel my dad had instilled in me. Here I’m seen at Thompsons Falls in Kenya at the age of 20. 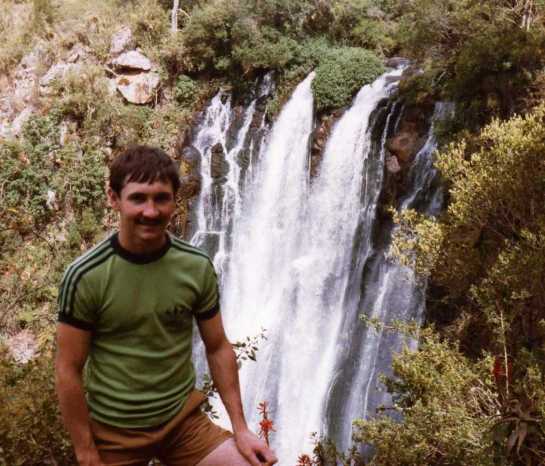 One thing my dad didn’t do was teach me any fashion sense (he was no better than me!). My clothes sense wasn’t good and the moustache hung around for thirteen years, goodness knows why?! I’m seen here riding on a sugar plantation in Kwa-Zulu Natal in South Africa. 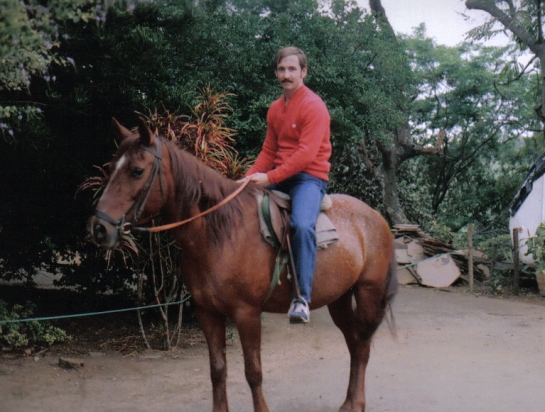 Fortunately on occasion a beard disguised the moustache. This is with a gibbon in Thailand. The poor thing was chained to a lamp post and was starved of affection. I shouldn’t have cuddled it but simply had to and it wouldn’t let me go. I wish I could have rescued it. 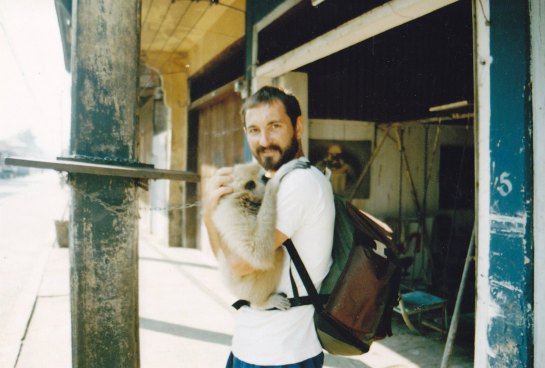 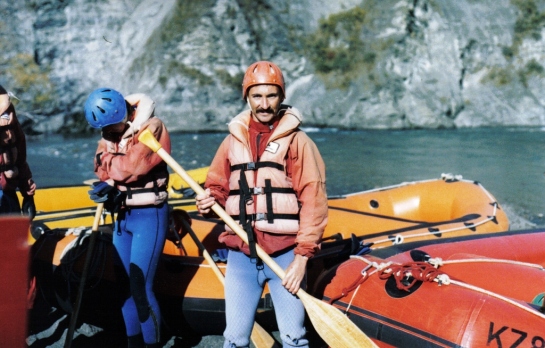 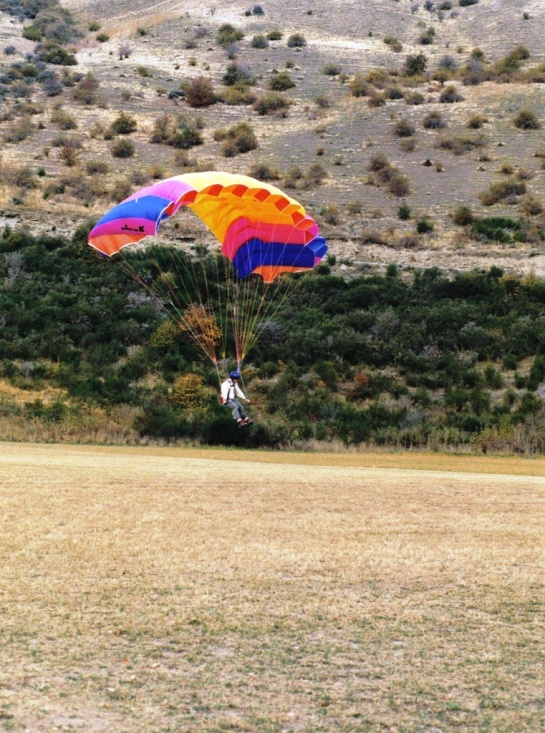 I’ve been stuck with my dad’s sense of animal empathy. Here a seagull chick had become stranded off the coast of Scotland and I decided to rescue it. 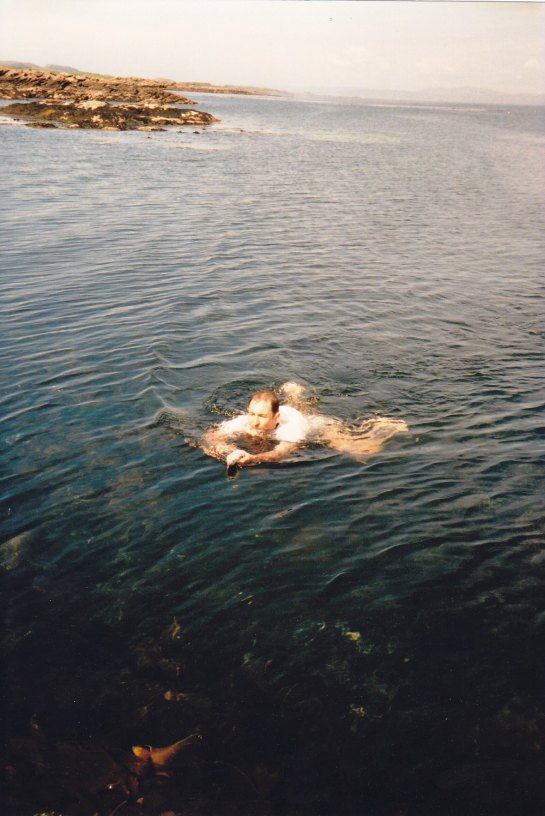 I literally froze for my trouble. Scotland isn’t known for its balmy waters. 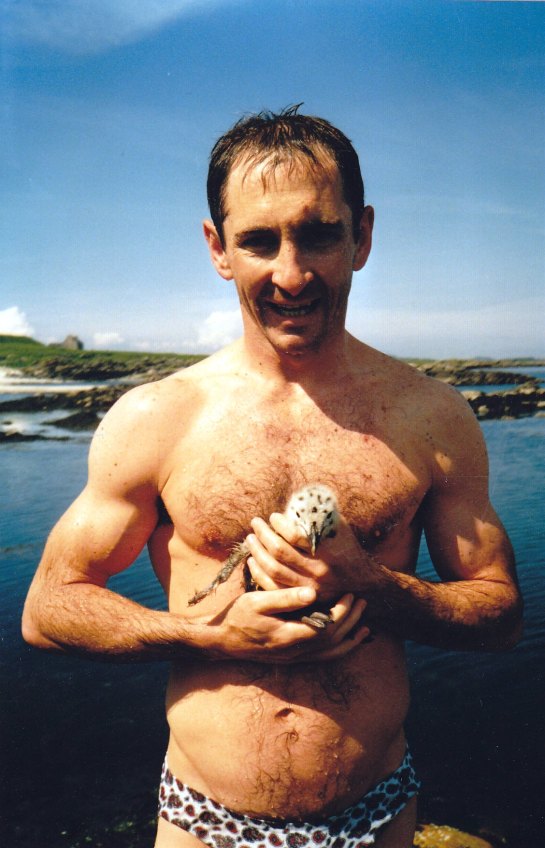 Yes, I managed to do some stupid things along the way. I got myself a tag along with Karen soldiers in the jungles of Burma for five days. This is one of the tribes that’s been trying to get independence from those horrible military rulers of the country and if they could just stop fighting with the other tribes that are on ‘their own side’, they might just do it. I had to familiarise myself with a bit of ‘protection’, not that I wanted to but following the rules was important. I’m sure I’m holding it wrong. 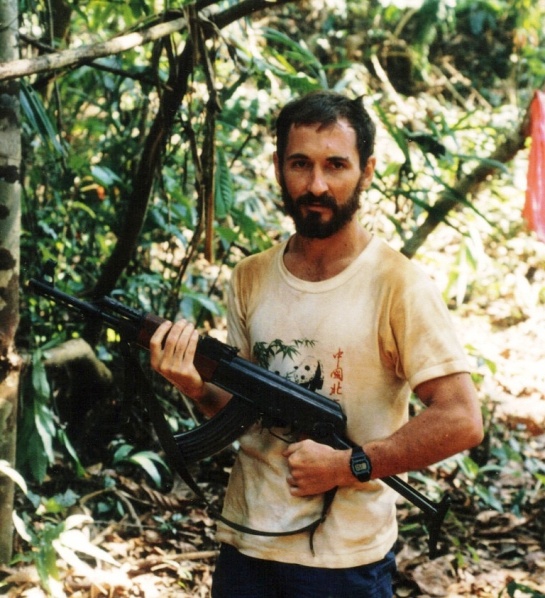 I’ve had some wonderful opportunities in my life, mainly because I’ve sought them out, but some have fallen into my lap. I got the opportunity to dive with minke whales who literally came up to me. These are the ones the Japanese have done their best to eliminate! Shame I only had a crappy throw-away waterproof camera. At one time I had six minkes in my vision, but I’d already run out of film (the old 35mm days) 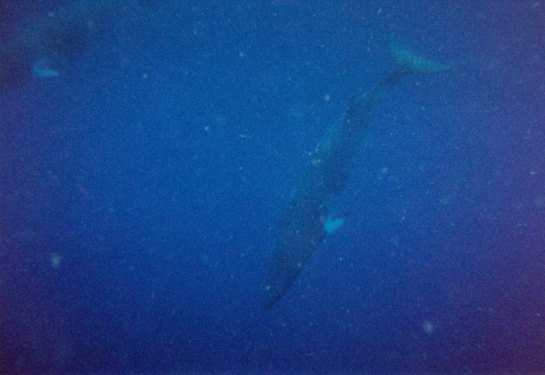 I was lucky enough to share the last 20 years with a kindred spirit, a wonderful lady who loves the things I love and is seen here with me on top of Mount Kenya in 1994 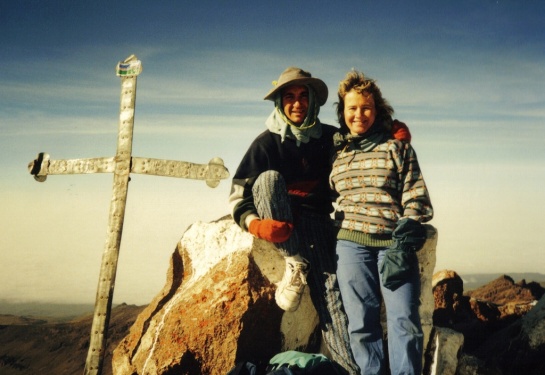 One thing she doesn’t share with me is my fashion sense. In fact I think she would rather move fifty paces to the left at times. This photo though wasn’t really my fault. We had travelled to Kenya on a shoestring with minimal luggage and decided to climb Mount Kenya at the last minute, so I had to buy some ‘warm’ clothes in the only store left available to me. My choices weren’t good and nothing fit but I still think I look quite dashing – Not! 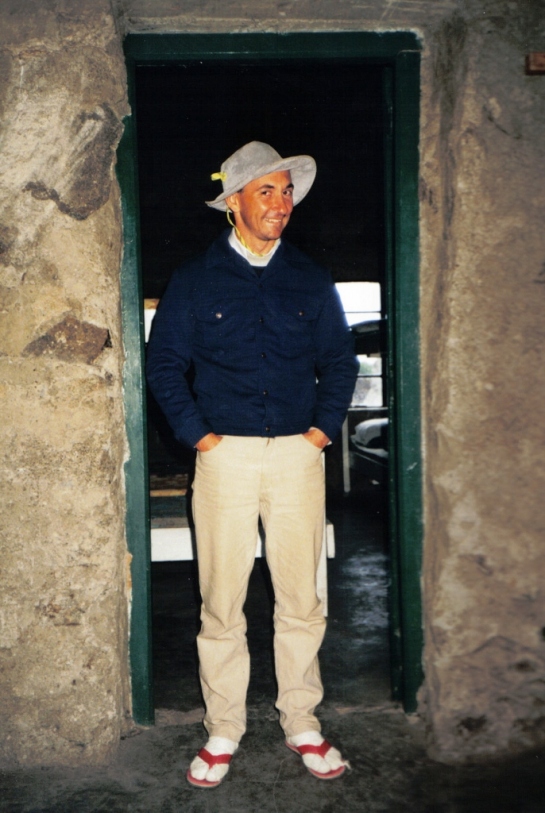 How could you not be inspired in a place like this. A snow-topped mountain right on the African equator with a glacier like this 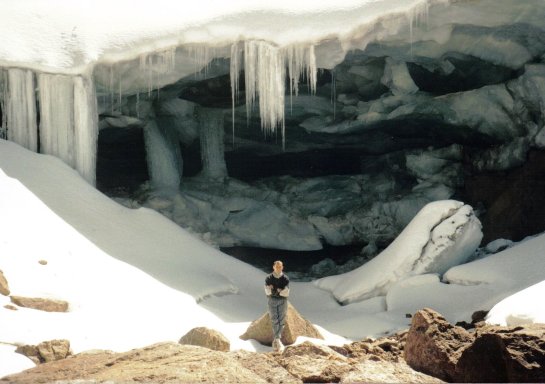 Animals find me or I find them wherever I go. Here I am with a Jacksons Three Horned Chameleon wandering around loose at the Nairobi Snake Park, and another one wandering onto my hand in Tsavo West National Park 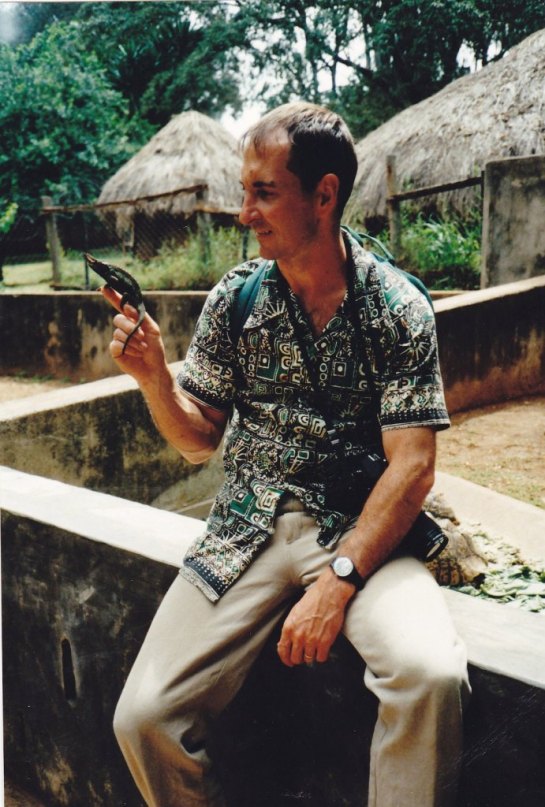 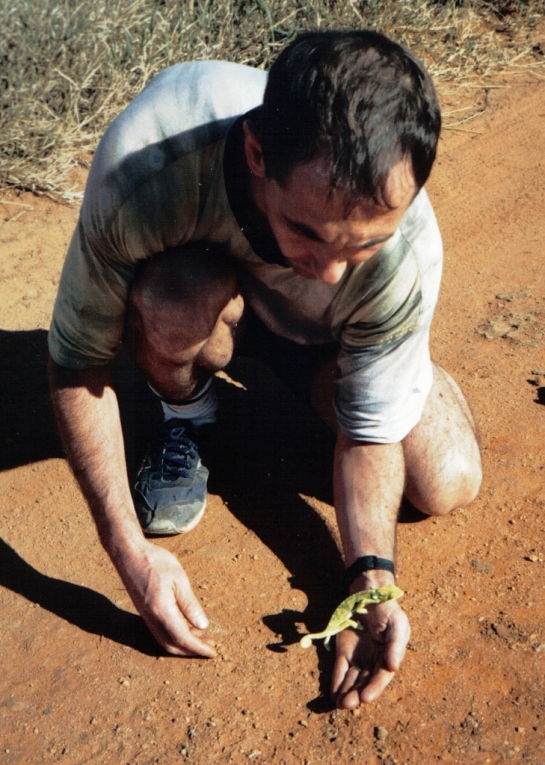 When you’ve been lucky enough to live a life like I have, it becomes a responsibility to raise the next generation to love camping in wild places. I think I’m having varying degrees of success here 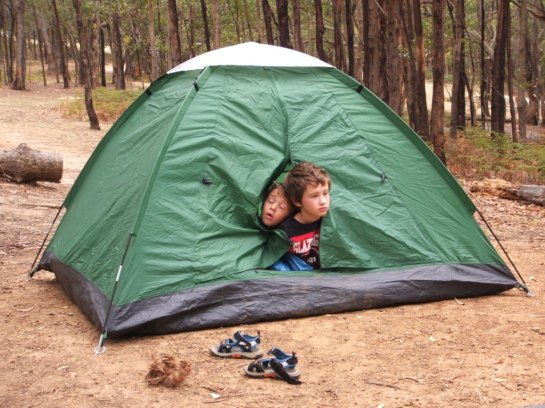 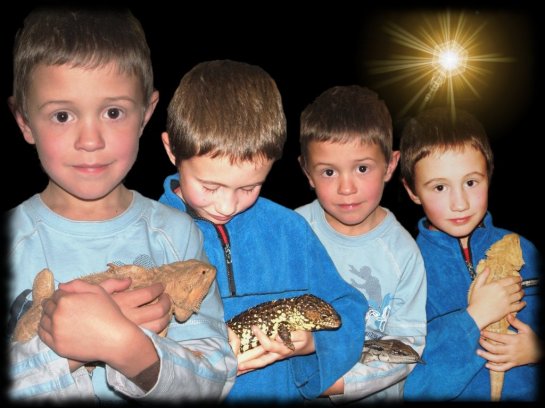 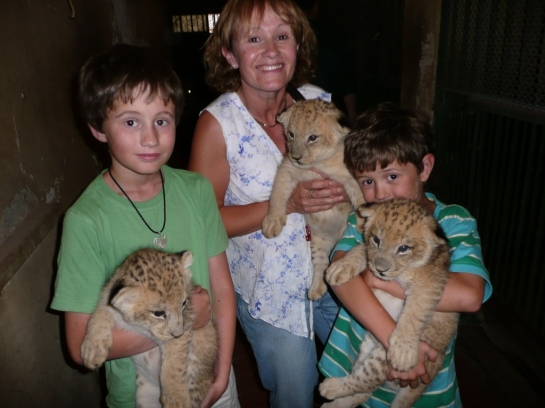 And as for my wife, she hasn’t changed, she’s as game as ever. 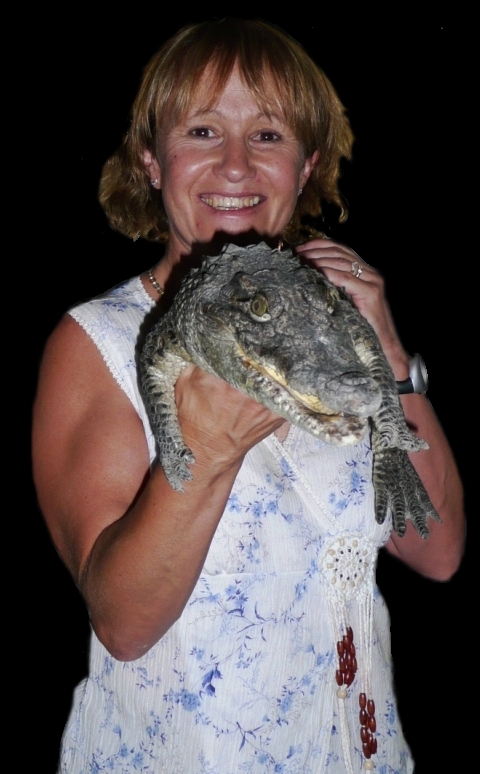 And me, I continue to be fascinated by wildlife and the wilderness and that will never change;

from playing with chimpanzees 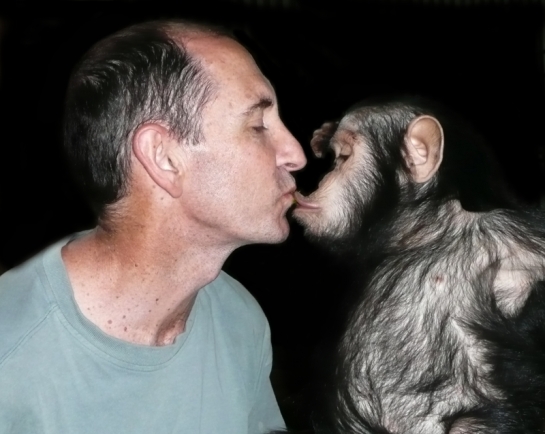 to feeding peanut butter to cheetahs 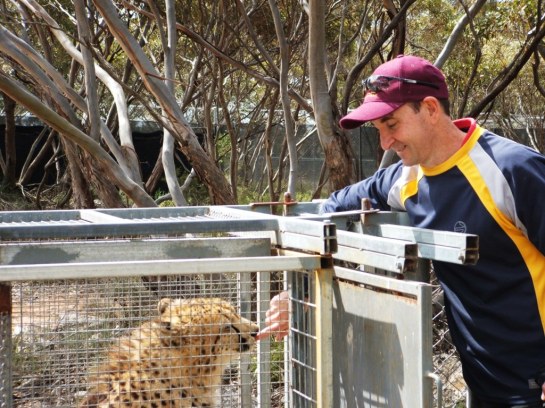 to mucking around with large lions in Zambia 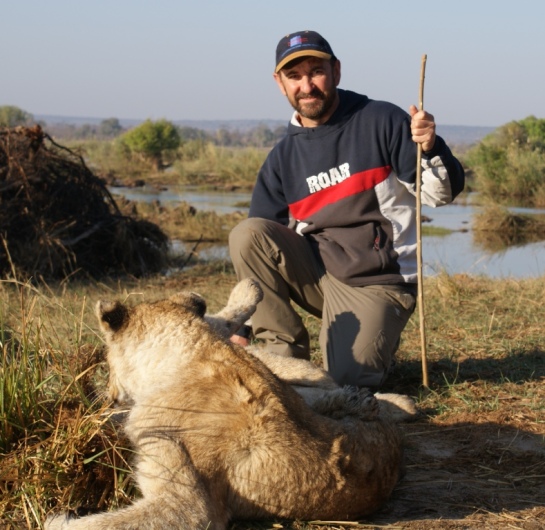 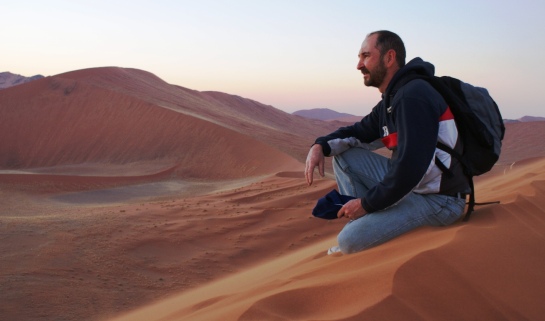 to sitting at the edge of a wilderness miracle called Fish River Canyon in Namibia. Yes, like the better known Grand Canyon but without the people and trinkets that are sold there. 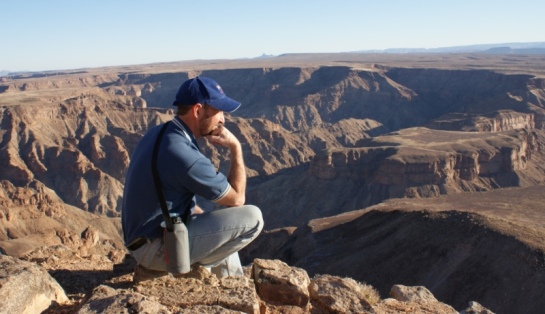 Long may this wonderful journey continue and let’s all buckle down and make certain the natural world is there for our kids to enjoy.

And finally, Australia has its blue tongued lizards but did you know that in the Okavango Delta in Botswana, a similar animal has managed to establish itself. Do not approach!! 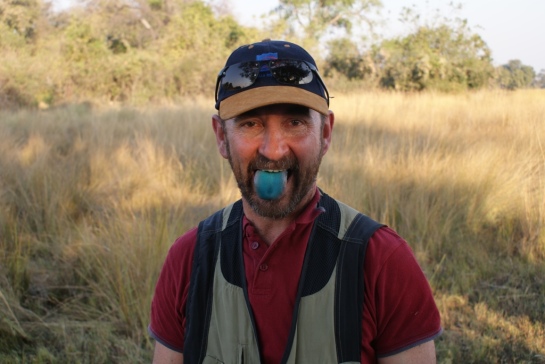