I received a massive honour when I won the Gold Medal (best in show) at the Wildlife Art Society of Australasia’s major biennial (once every two years) show in 2010 with this piece below. “Abu” was created to honour the alpha male chimpanzee at the “Jane Goodall Institute Chimp Eden” in South Africa. Abu died of congestive heart failure. 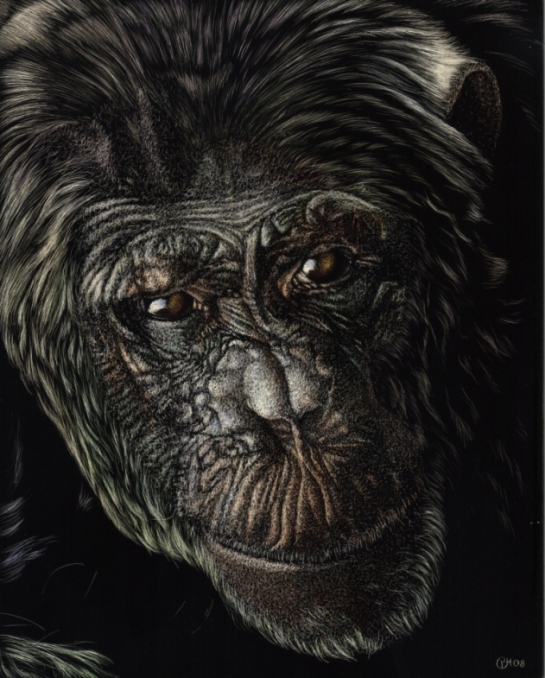 Dr Jane Goodall, DBE, UN Messenger for Peace – and me!!

Every now and then, all the stars align. In late 2008 wildlife artist Leigh Rust and I collaborated on an exhibition of paintings designed to raise awareness of chimpanzees and the work surrounding them. We held this exhibition at Monarto Zoo in South Australia and money raised went to Monarto, The Jane Goodall Insitute and the Tacugama Chimpanzee Sanctuary in Sierra Leone, West Africa. We timed the exhibition to coincide with the dedication of Monarto’s new chimp enclosure by the legendary Dr Jane Goodall and we were extremely fortunate to have her open our show too. I made certain I kept in contact with Polly Cevallos who coordinates all of Jane’s movements. Jane, who animal lovers will know of, is the scientist who conducted the first major ‘in situ’ study of primates in the world. She lived with chimpanzees in Gombe for ten years and went on to redefine how we look not only at apes but also at ourselves. She now travels the world, visiting about 30 different countries a year, educating one and all about chimps, the environment and our part in it (as opposed to our lordship over it). For Jane’s efforts, she is now a DBE or Dame of the Bristish Empire and is also a United Nations Messenger for Peace. It seems bizarre in the extreme that I could organise for a person of her standing to open an exhibition of mine, but it is also in her character to do everything she can that is positively chimp related.

Jane’s time is extremely limited and valuable so she was shunted into our exhibition, declared it opened and then shunted on to her next engagement. The premier of South Australia, Mike Rann also was on hand and looked through it too.

This is me being introduced to Jane by Steve Callery, the zoo’s director of visitor experience. Leigh Rust, the other artist is on the right.

Leigh painted a portrait of Jane with one of the chimps and presented it to her. It was a gorgeous portrait. 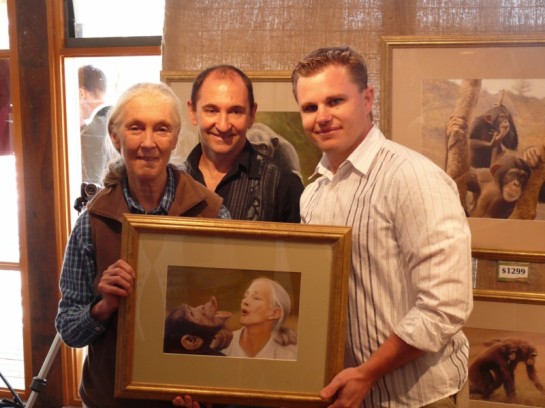 Here I am with the premier Mike Rann

And here’s another icon from the worlds of zoology and conservation, Dr Chris West. Chris is the director of the Adelaide and Monarto Zoos and was a former director of the London Zoo and is leading the charge to make modern zoos find their place in urban environments yet still contain the ethos of scientific research and conservation and rehabilitation. He’s here with Jane. 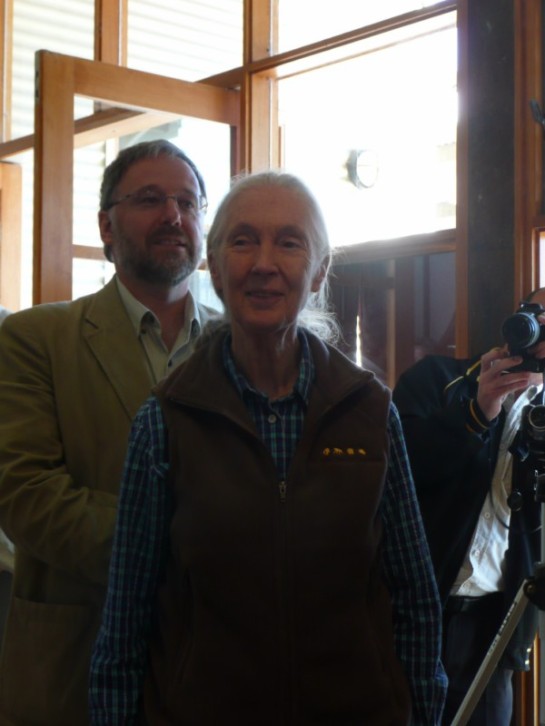 I had already spent a lot of time setting up the exhibition. We got a fencing company to lend us some temporary fencing and another company to give us some hessian which I used to cover the fencing. This was perfect for the Monarto Zoo environment. I needed it to be free so that as much money could be directed to the charities, rather than paying costs. Here is Leigh with his ‘frontispiece’ on one of the panels.

And here’s me with mine

These are the panels full of paintings, half by me and half by Leigh. One panel was ‘non-chimp’ artwork but the rest were all chimps. 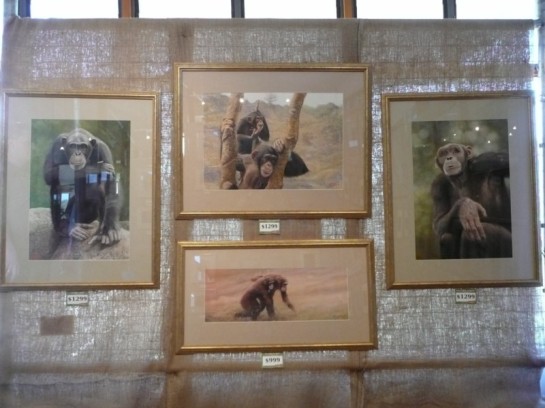 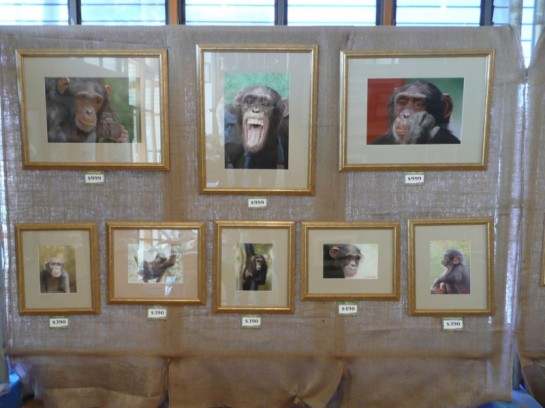 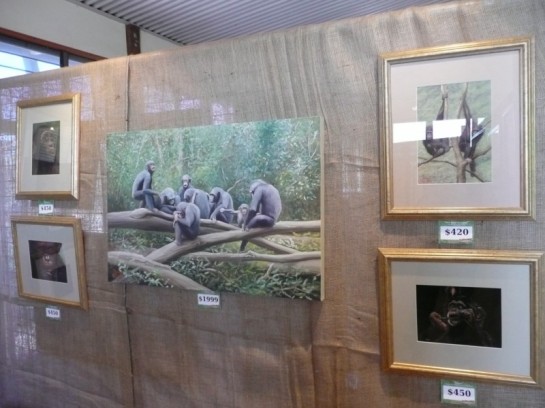 The first painting to sell was one of Leigh’s called “Escaping the Fires” and the buyer was Dr Carla Litchfield. This woman knows her primates and vindicates everything we stand for. She’s on the board of the Royal Zoological Society and is the president of the Australasian Primate Society. No more credibility needed.

Here we both are with some more sales and customers 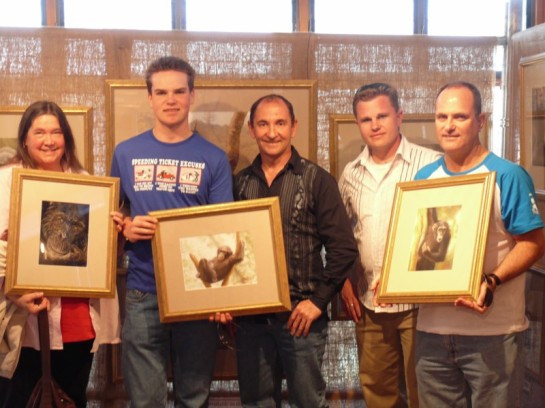 Here I am with an awesome South Australian artist who sells out every show she does, the incomparable Kim Buck. 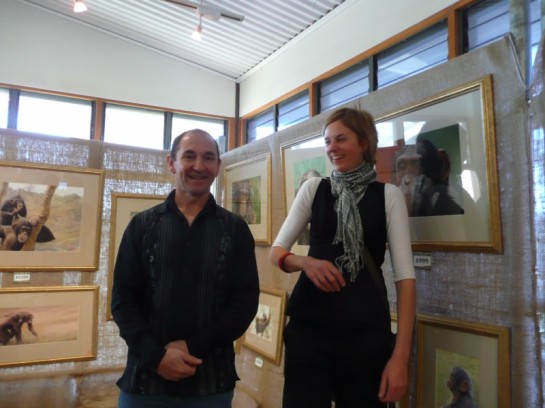 Then onto some demos. Leigh did a pastel and I worked on a scratchboard. These generated massive interest. Leigh knocked his over quite quickly, producing this lovely lion of which I am now the proud owner. 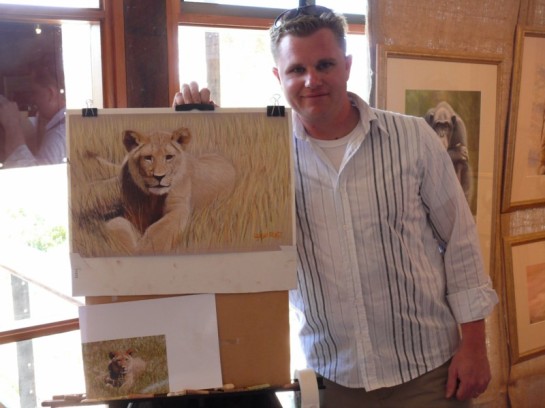 I worked on this cheetah which I sold before it was a third finished. I like working in public because I can chat to prospective customers who can see how I create my art.

The opening day was a resounding success but better was still to come. As I was driving home, I got a phone call from Monarto telling me that Jane Goodall had been shunted out of our exhibition so quickly she didn’t have chance to check the art out very well. After her lectures and other official activities, she told her people that she wanted to go through it again and spend some time looking at the art. I can happily report that she was so impressed that she invited me to her lecture in the Adelaide town hall the following night.

The lecture was amazing. She talked for an hour without any notes, and it was great and challenging stuff. Then she said she wanted to honour the staff of her Roots and Shoots program and others who were making a difference. She called up on to the stage the Roots and Shoots people, by name, one by one, a couple more people and then called up the director of the Adelaide / Monarto Zoos, and then she called me up. She also verbally honoured Leigh who was already back in Melbourne.

I stood between Carla Litchfield, as previously mentioned the President of the Australiasian Primate Society, and Chris West, the zoo director as she went on to say “These people are making a difference, now stand up those of you who want to make a difference” (and the whole audience of about 700 people stands up of course).

Can you believe it?? She singled me and Leigh out, and made an example of me and the ten or so others for the whole audience to see as people who are doing their bit.

————————————————————
This exhibition was to support ‘Shelter Boxes’, a humanitarian aid. It’s a box which contains a tent, blankets and other emergency rations which can be speedily flown into disaster areas such as after a tsunami or hurricane.