I am a wildlife and occasional portrait artist who has been juried into The International Society of Scratchboard Artists as a Master Scratchboard Artist and a Signature Member of The Society of Animal Artists. These are both wonderful organisations and I’m proud to have achieved such a high level in both, a real honour for me.

I was born in Kampala, Uganda, and lived for 14 years in and around East Africa. This early childhood instilled in me a love of wildlife and the outdoors. Most weekends were spent camping along the banks of my family’s favourite river, or in some gamepark somewhere in the middle of nowhere. My bedroom was always full of live snakes from harmless green tree snakes all the way up to cobras and mambas. A couple of large greater plated lizards had the run of the house, as did a zorilla (Africa’s version of the skunk), a couple of dogs and a variety of birds such as owls and kites, usually ones which had broken their wings and were brought to my family by their rescuers. A duiker (a small antelope) also shared the garden. What a life!! And what a tolerant mother! Her tolerance was, however, severely tested when one day she went to have a bath, only to find over 40 dwarf toads in it, crawling over each other.  Where else could I put them?

In fact, how many mothers would voluntarily go camping for weeks on end in areas where there is no water? My mum gave birth to the concept known as the ‘Suswa Wash’, a very elaborate and scientific style of bathing, originated on Mount Suswa, an extinct volcano in Kenya. After a bucket of precious water had been used for everything, including the dishes, the dregs were thrown at your face and ‘hey presto’, the Suswa Wash. Better than weeks on end with no contact with water at all, I suppose!

I moved with my family to England in 1974 after my father died, having received hornet stings on a camping trip we were on, and although I still love England, it was never home. I never wanted to leave Africa but had no choice. By the age of 26 I was restless and spent the next three years wandering the globe, working a bit here and a bit there, and visiting about 50 countries along the way. The sketch book started to come out during this period.

It wasn’t until many years later that I actually started to develop my skills as an artist, but once I did my core subject matter was always going to be wildlife.

In 1990, I met a lovely young Australian called Gaynor, and we married in 1991 in Adelaide, South Australia, where we both still live with our two children, Brock and Carter.

I work in a variety of media but mainly scratchboard and soft pastels. I love detail and it’s my wish to communicate the soul of the subject by paying special attention to the eyes and facial features. My goal with my art is to allow the viewer to feel something and for that to happen, I need to feel it first. It may be compassion, pain, love or some other emotion, but if I’ve created it, it made me feel something in the first place and I hope to convey this to the viewer. 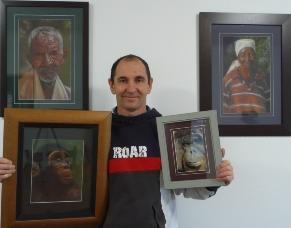 I’ve always been mad about animals as can be seen from these photos of my childhood. All of these animals were pets which had the run of the house. I’m the smallest person in most of these photos. My brother is a couple of years older and my dad is the one holding the 12 foot python with me.