I find this quite odd, and nice. I’ll certainly take it. Our wonderful Kris Peter of the Wildlife Art Society of Australasia managed to get a bit of publicity in one of our famous Australian magazines, Burke’s Backyard (which is a spin off from a hugely successful garden TV show). It advertises WASA’s “Wild Awards”, our biennial (once every two years) major show. It’s all sorts of wildlife art but it’s in support of the “Birds in Backyards” program. Kris sent them lots of paintings of birds for them to choose from (to keep it relevant to the theme), and they chose one of my zebras!! Admittedly they also chose a gorgeous piece by Vida Pearson of genuine birds. By the way, if you click the link to Kris Peter’s site you will see that her bird paintings are absolutely delightful.

I have to admit it’s nice to be published in such a magazine. Here’s the segment with my “Water Baby” 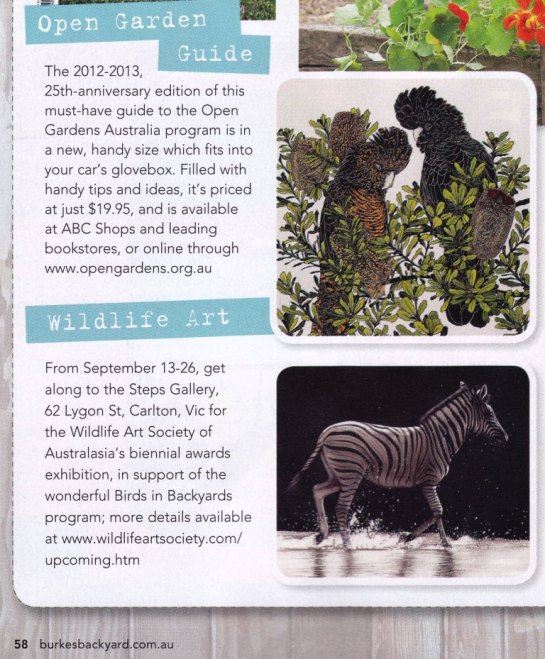 When we had the International Society of Scratchboard Artists (ISSA) workshops in Sebastopol, California, in July I worked on the following piece.

I promised I’d put up a few photos up of the International Society of Scratchboard Artists‘ 2012 exhibition in Glen Ellen, Ca. and also some of the workshops we held in Sebastopol.
This is me with my zebra piece “Lifeblood of Etosha”. This piece won “People’s Choice” and is now winging its way to its new owners in Florida.

In the same photo you can see a piece by Lorna Hannett of a Himba maiden and another of hers of buttons and lace. My little kangaroo is there and also Cathy Sheeter’s “Moment of Reflection” (the dog’s eyes). If you click this ISSA link you will be able to see all the pieces that were in the show.

Due to my work with chimpanzees in the past, and the belief by some of my fellow artists that I look like one, Cathy Sheeter bought me this shirt and here I am trying to look like the handsome fellow on the front of the shirt. He’s definitely better looking!

To the workshops and demonstrations, I’ll start with mine. I showed how I do my unusual skin techniques and also the way I’ve been creating zebras by using the airbrush and the fibreglass brush.

I’m really not sure what’s going on here 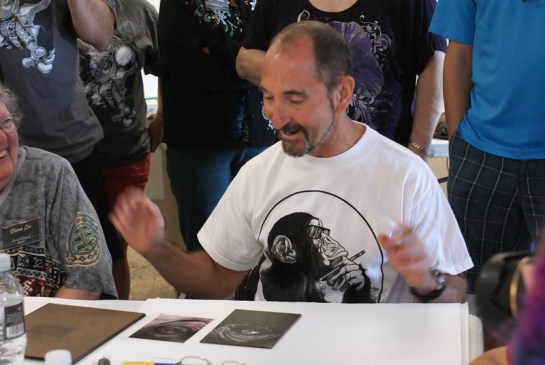 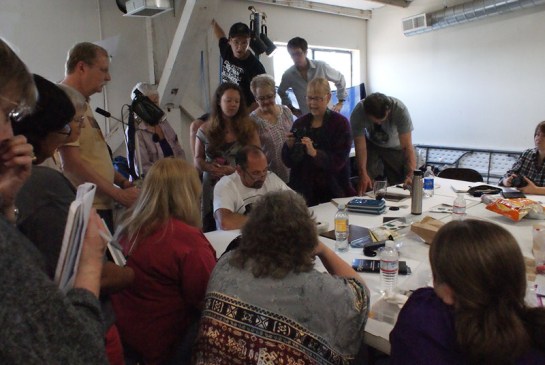 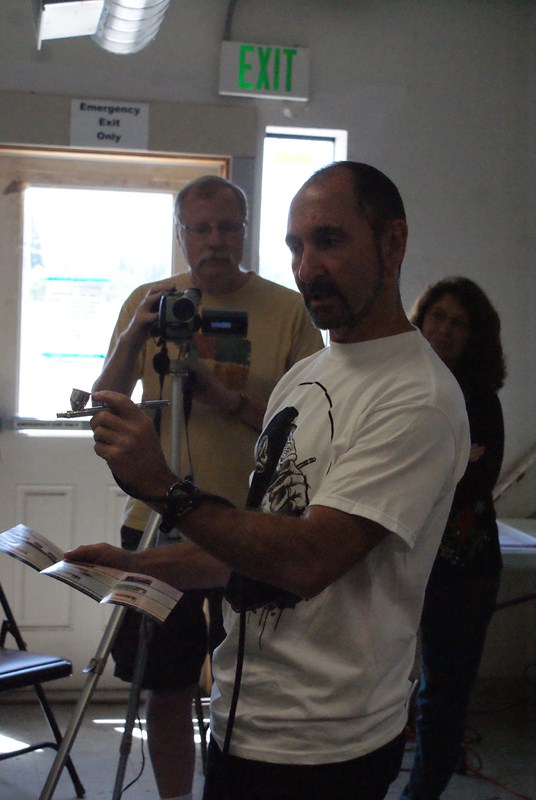 We only had just over and hour each so I’ll finish this piece later and show you all what it turns out like.

Lorna Hannett showed us how she creates skin in her meticulous way. She can put up to 300 hours into a small piece, something that simply boggles my mind. I love her work! 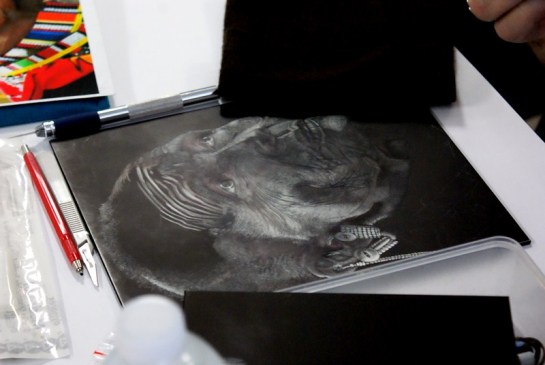 I had the honour of being shown through Diana’s home and managed to get a few snaps of some of her amazing work. Here are a couple of those 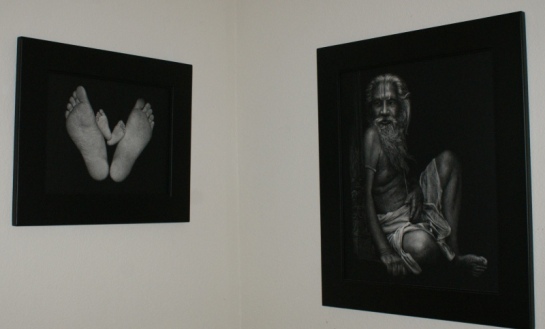 Heather Lara taught us about her colour techniques. 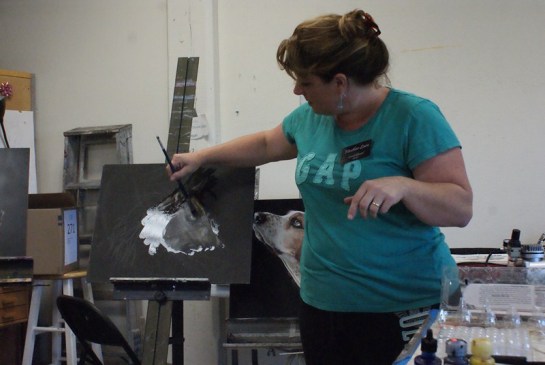 She sure produces amazing work 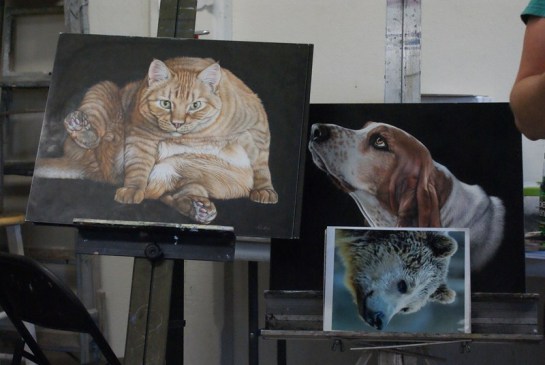 Allan “Ace” Adams, the character among the group, showed us how he creates bark and rocks

Here he is living that brilliant Crocodile Dundee line “That’s not a knife, this is a knife!!” Allan did that for my Australian benefit. 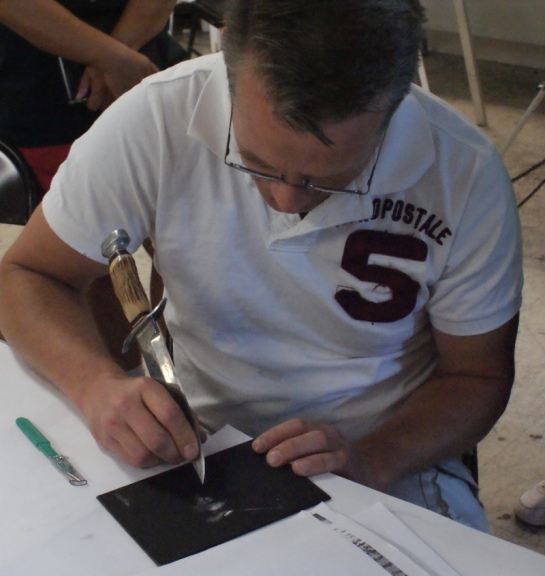 Ann Ranlett creates some very unusual backgrounds and we all wanted to know how she does them. Here she is at work and with one of her gorgeous pieces (the dog with the bone) in the exhibition 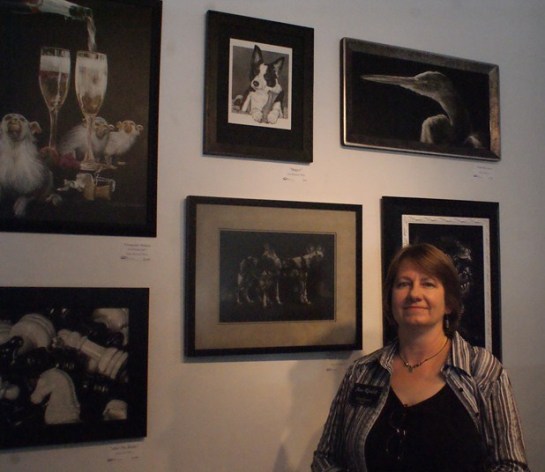 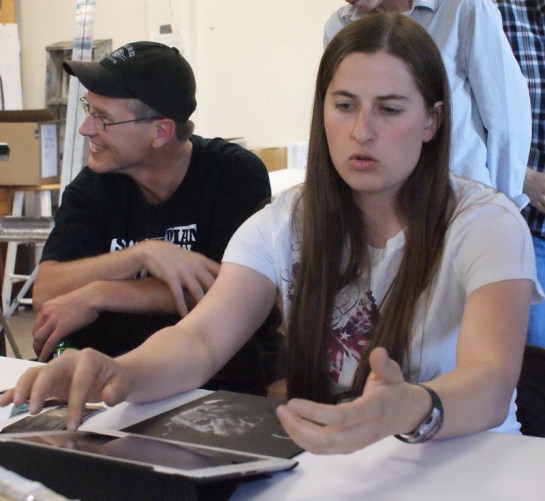 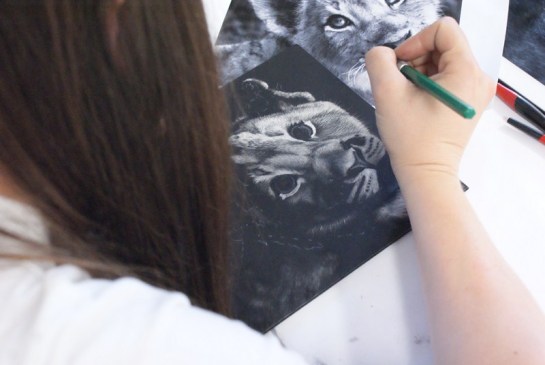 The medium of Scratchboard can produce amazing detail and so many of us invest hours and hours in our work. As such, the demonstrators all started pieces before the workshops that we could continue with so viewers could get an idea of what we were doing by seeing what we had already done.

All of us except for the next bloke. Rod-Man is an amazing artist. Well, he’s an amazing person. I’ve already mentioned his magic tricks which had me bamboozled and in stitches. Among other things he’s a diver, a veteran of 1,700 parachute jumps and a tattoo artist, and he created a work of art, from scratch (pun intended), right before our eyes. In one and a half hours he went from white board to almost completed masterpiece.

His initial concept was based on the fact that we were near San Francisco with its hilly streets, so he envisioned a skateboarder zooming down the road. 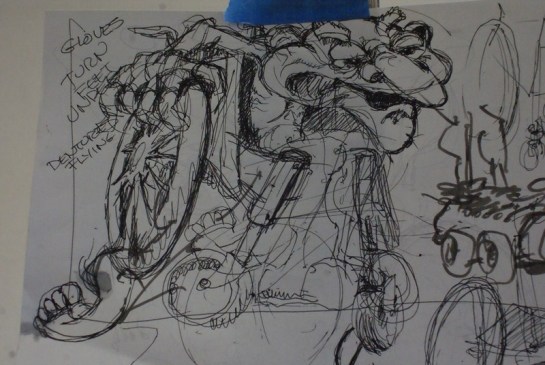 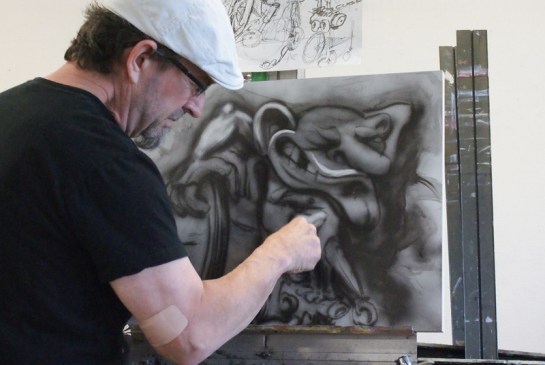 He finished it a day or two later. Absolutely amazing.

Do you reckon we learnt anything? You betcha we did!! And had a blast into the bargain!

I’ve just returned from my trip to the States and England and before I follow through on my promise to update you all with photos from the scratchboard exhibition in Glen Ellen I thought I’d add a couple of new pieces. At the exhibition we had two days of workshops in Sebastopol and I started the following pieces which I finished in England. The first is of a chimp’s eye and the second is of a girl I saw in Botswana. I thought this girl, while not classically beautiful, had such a striking face which I wanted to portray.